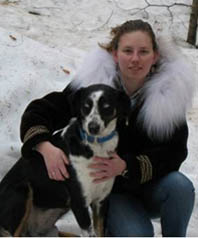 Dr. Heather Huson is a Professor of Dairy Cattle Genetics at Cornell University, where she works with a team studying genetic improvement and diversity in livestock. Over the course of her career, Huson has used a number of different analysis tools in her research, but has found the ease of use and efficiency of Golden Helix's SNP & Variation Suite (SVS) to be instrumental in her research as well as teaching genetic analysis to her students.

One could say that Huson almost fell into the genetics field as it was not on her radar throughout her time as an undergraduate student at Jefferson Community College or Cornell University. Much more interested in animal nutrition, she worked as a veterinary technician for a number of years after graduating. However, a genetics project on sled dogs (her passion from growing up racing them) fueled a change in her interests. With the goal of discovering the genes associated with performance and a new job as genetic laboratory technician at the University of Alaska, Huson had found the best of both worlds.

This project turned out to be much more extensive than Huson imagined, so in order to learn more about genetics, she accepted a position as a post-doc with the USDA working on cattle and goat genetics. When looking at genetic selection, genetic evaluations, and marker-assisted selection, dairy cattle are the gold standard and the quick turnaround of science to application within agriculture drew Huson into agrigenetics. The communication between research and the industry in addition to the turnaround time is why she has stayed in livestock genetics.

Huson's lab focuses on the genetic improvement and conservation of animals, primarily livestock, which includes looking at their genetic diversity and adaptation. The lab runs three to four large projects with sample sizes in thousands spanning up to 80 different breeds, as well as a number of smaller projects each year. Currently, the lab's two major projects are focused on mastitis and lameness in dairy cattle and the genetic diversity among a huge population of different breeds and ecotypes of goats in Africa. Some of the smaller projects are focused on sheep, performance and diversity in sled dogs, and the conservation of genetics in musk ox. Given the variation of projects, Huson and her team needed versatile software tools to carry out their analysis.

Initially, Huson was using Plink as her main analysis tool. Although Plink is versatile, she was forced to use other tools such as R software to visualize the results of her analyses. "That's one of the huge benefits of SVS - it's user-friendly and you can basically visualize your results in the same program. So you don't have to spend nearly as much time manipulating data and results to get it in the right input and output formats." Ease of use and the time saved are the two major benefits that Huson sees using SVS.

In addition to working in the lab, Huson teaches the required core class, Principles of Animal Genetics in the Department of Animal Sciences at Cornell University. The class has approximately 125 students each spring, and Huson uses a combination of traditional textbook teaching with practical application such as laboratory protocols and extracting DNA. However, a large part of what modern geneticists do is computer analysis, which Huson has made a key focus.

For the past two years, Huson has used SVS in class to teach the analysis portion of her core class. "I wanted something that was not only easy to use, but something that shows my students what the data we talk about all the time looks like", said Huson. Students are given a look at an association study as well as a population study, walking through the specific analysis steps and quality assurance. The exposure to computer analysis methods in Huson's course is often the first, and maybe the only look students will get in their undergraduate years unless advanced elective courses are taken. "We have had a lot of success using SVS over the last two years. If students do go on to pursue a career in genetics, there is no doubt that previous experience with computer analysis is beneficial".

Although Huson was not originally interested in agrigenetics, she has made her mark in the field. From educating the future agricultural geneticists at Cornell University to her concerted efforts in the improvement and conservation of livestock, Huson continues to spread her knowledge of animal genetics and take advantage of the quick turnaround from research to useful application in the agricultural industry.