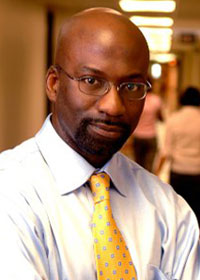 Dr. Rick Kittles,former Director of the Institute of Human Genetics at the University of Illinois at Chicago, investigates the genetics of complex diseases that disproportionately impact people of color. Well known for his research in this field, Kittles has been featured in the PBS series African American Lives, in two BBC Two films, and on 60 Minutes. His work in genetics will, no doubt, help contribute to improved treatment and prevention strategies specific to minority population groups. To accomplish this goal, he utilizes a variety of methods including gene panels, SNP markers, and DNA sequencing, all of which produce massive datasets and thus require a robust analytic tool to produce results. With SNP & Variation Suite (SVS), Kittles can quickly interpret his data with ease. "We just did a GWAS with 2 ½ million SNPs in minutes with SVS. It's impressive," said Kittles.

Kittles earned his BS in Biology from the Rochester Institute of Technology and his PhD in Biological Sciences from George Washington University. Kittles on his progression: "I got into genetics from a biological, anthropology backgrond ? I was really interested in using genes to understand population history. But as my interest in population genetics grew, I became fascinated by the fact that certain populations were more vulnerable to certain diseases than others. I decided I should really look at human genetics and complex diseases."

In 1998, he was hired as an Assistant Professor of Microbiology at Howard University in Washington, DC and Project Coordinator of the African American Hereditary Prostate Cancer Study (AAHPC) at the National Human Genome Center, where he successfully enlisted over 100 hereditary prostate cancer families. Kittles served in these positions until 2004, when he accepted a position at The Ohio State University in Columbus. It was here that he first encountered Golden Helix. "A lot of what I was doing at the time was statistical genetics. Golden Helix software allowed it to be much easier and visual," said Kittles.

Two years later, Dr. Kittles accepted a new position at the University of Illinois at Chicago, where he used open-source software. As his lab's workload increased, and arrays grew in size, Kittles was cognizant of there being a better way. "We needed something that could manage the very large datasets we were working with."

Dr. Kittles' main focus is prostate cancer, but he also works with colon and breast cancer, sickle cell anemia, red cell alloimmunization, and pulmonary hypertension. For each project, Kittles has at least one GWAS dataset. He says, "In some cases, there are thousands of samples and in other cases, there are only a couple hundred. But even with those smaller studies, there's still over a million SNPs. It's been very easy to manage those large datasets using SVS's data sheet management system." Most recently, Kittles and his team have been conducting next-generation sequencing to identify novel variants in pharmaco-related genes and have been able to do so with Warfarin dosing in African-American and Hispanic populations.

When asked about the value of Golden Helix software, Kittles stated: "SVS goes beyond simple genotype associations with Identity By Descent (IBD) calculations, principal component analysis, and the ability to visualize results, all in one application. So when people say 'It costs money,' I respond that it's better to have one program that can do everything than to have to look for updates on multiple applications all the time." Additionally, Kittles found that he can work with different types of data from platforms such as Illumina, IonTorrent, Affymetrix, and more without issue: "The platform doesn't even matter anymore because it's all annotated well in SVS, and the software is turn-key."

With the various projects and studies Kittles is working on, SVS is vital to his lab. It enables him to quickly analyze large datasets and easily visualize the results. "My favorite thing about SVS is the visualization capabilities. To be able to interface and combine different tracks and types of plots is crucial to understanding the data."

He concludes: "All of my datasets are blacks and/or Hispanics. It is an underserved community that can really benefit from genomics now."