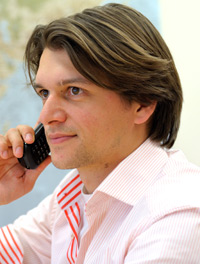 Sander van der Laan, a doctoral candidate at the Interuniversity Cardiology Institute Netherlands (ICIN) based at the University Medical Center Utrecht (UMCU), performs genomic association studies with the goal of uncovering biomarkers and drug targets for atherosclerosis. Upon initiating his PhD work, van der Laan realized that he needed an analytical tool that was better suited to the manipulation of large-scale genomic data than open-source offerings. Van der Laan found SNP & Variation Suite suited his research needs exactly. "With Golden Helix, my frustration went out the door," he says.

"My internship was six months, and in that time, I was able to get from raw data to something you could work with," van der Laan says. "However, as soon as my internship finished, I knew the data wasn't good enough for reliable results. When I began my PhD, I knew I had to start over."

In the experimental cardiology lab at UMCU, there are sixty researchers who are primarily focused on proteomics; van der Laan has sole responsibility for "making sense" of the genomic data. Using Affymetrix' Genome-Wide Human SNP Array 5.0, the biobank collected blood-based DNA and plaque from 836 patients with atherosclerosis; cursory quality assurance yielded just more than 700 samples. Van der Laan planned to impute the Affymetrix 5.0 data using BEAGLE and BEAGLECALL, which would result in 2.5 million SNPs. He wanted a data analysis tool that would be both easy-to-use and compatible with multiple file formats.

At that point, van der Laan recognized the limitations of relying solely on command-line applications, such as PLINK and R, to complete his analyses. So he started searching for a more intuitive tool that would be capable of importing and exporting various file formats. However, most commercial offerings were better suited to expression pathway discovery and other proteomics applications. He considered one popular commercial tool, but it was neither user-friendly nor particularly suited to SNP analysis.

After a brief evaluation period, he ultimately chose Golden Helix's SNP & Variation Suite (SVS) software. Within two months, van der Laan had clean data in a format he could work with.

This productivity gain exceeded van der Laan's initial expectations. Anticipating the full breadth of results required by the Athero-Express study, he chose to purchase the Power Seat of SVS. Without these tools, van der Laan imagines that he would still be working on quality assurance today?one year since he began his PhD work.

Van der Laan appreciates the software's extensive capabilities, in addition to it being user-friendly and capable of manipulating data in multiple formats. This is indispensable in large-scale genomic studies. Whereas free command-line tools crashed on large datasets, SVS accommodated van der Laan's data seamlessly. Learning how to use the software was easy, he says, thanks to Golden Helix's free training, tutorials, a live support team, and an informative website.

Moreover, van der Laan considers SVS ideal for data management, as it can convert and customize annotation library tracks as he explores his data. Because the software takes advantage of his computer's full capabilities, van der Laan's analyses are accelerated without compromising accuracy. Additionally, van der Laan found that the flexibilty of being able to export various file formats to work with programs such as BEAGLE was invaluable.

Since van der Laan began using SVS one year ago, several powerful quality assurance methods have been implemented through regular updates from Golden Helix. Thanks to intuitive and customizable graphical user interfaces, he can make his project's data accessible to colleagues without the need for prior training or coaching. Van der Laan has already written and integrated his own customized script for strand-flipping using SVS's Python script editor.

Currently, van der Laan plans to initiate both CNV and whole genome SNP analyses. Some exciting results regarding the predictive power of certain proteins on atherosclerosis have already been found. He hopes to finish his doctorate in the next three to four years, and then perhaps begin a career as a geneticist intermediate between academia and biotech.

In the meantime, his PhD supervisor continues to demand new genomic analyses as new results are uncovered daily. With the analytic power of SVS applied to his store of SNPs, van der Laan now feels like he can meet these expectations head on.